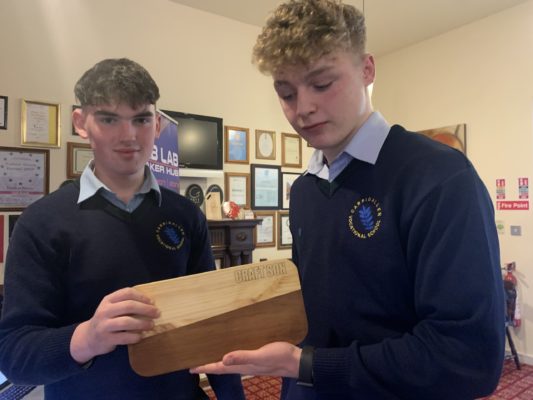 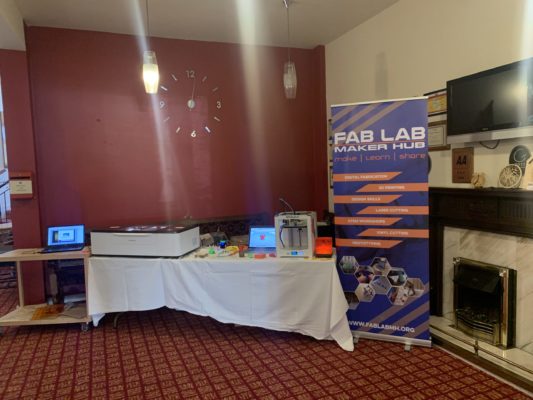 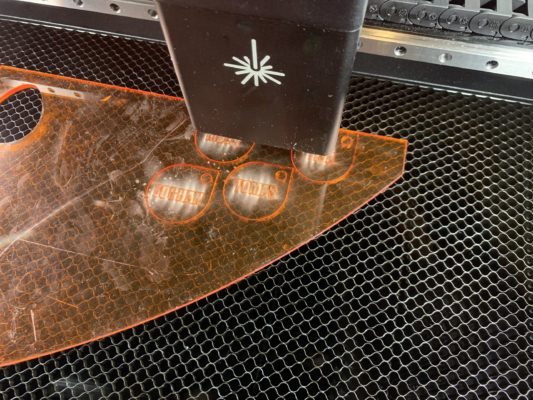 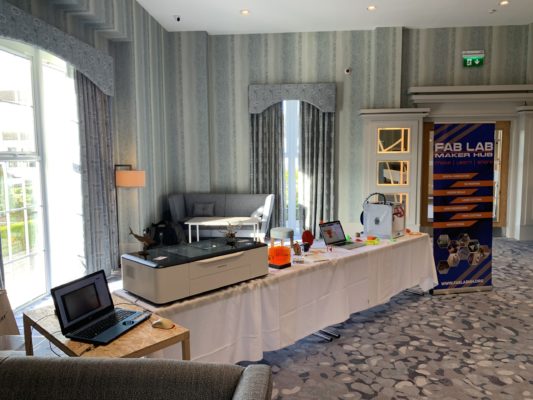 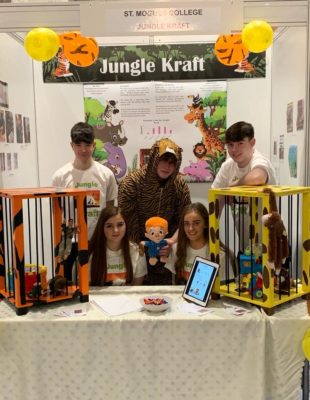 Just before the Covid19 pandemic closed all schools for the remainder of the academic year we were fortunate enough to bring our Pop Up Fab Lab to the Leitrim, Cavan and Roscommon Student Enterprise Regional Finals. We educated and entertained the fledging student mini-companies with demonstrations of 3D Printing and Laser Cutting and made Laser Cut Acrylic Name Tags for the students.

The Leitrim event was held in the Bush Hotel, Carrick on Shannon on the 3rd of March and featured entries from all of the Secondary schools in the county. Some notable business ideas featured hand crafted products and one in particular benefitted from some enhancement with digital fabrication. The team of Craft Son from Carrigallen Vocational School took offcuts of timber and made beautiful wooden chopping boards. On seeing our Laser Cutter in action they were immediately taken with the idea of laser engraving their brand name onto the chopping boards. This lead to a mini production line to brand their wares for the Enterprise Award judges. Although the team didn’t win this time around they did manage to get their first order from the owner of the Bush Hotel who purchased 3 boards and had the Bush Hotel Logo laser engraved onto them.

Photos of all the Leitrim Award Winners here

The Cavan finals were held in the Slieve Russell Hotel on the 4th of March and like the plush surroundings was an immaculately produced event. Eight schools from Cavan county took part in this years Student Enterprise Awards. One company that caught our eye early on and ended up winning top prize in the senior category was Jungle Craft from St Mogues College. They produced some really well crafted and innovative storage units for toys. The units were made using a CNC machine and hand tools, then hand painted in bright jungle themed colours and patterns. The design incorporated strung elastic bungee cords to keep the contents secure but allow for easy access by small children.

The Roscommon finals were held in the Abbey Hotel, Roscommon Town on the 12th of March. As it turned out the event was destined to be the last day of the school year for all the students there as the schools closed countrywide on the 13th of March. The news of the shutdown came early on in the day and so the event had a party atmosphere about it aided by the Magic Mirror selfie photo station in the foyer. The mini companies were all doing their best to impress the judges and we helped one company to brand their gift mini hurley sticks with some laser engraving.

The National Finals were due to be held in Croke Park on the 1st of May but the lockdown has meant that they will now take place online with the final awards ceremony being held live on the Student Enterprise Facebook and YouTube pages at 3pm on the 27th of May. More Details including the lists of all the National Finalists HERE.

Cookies are a thing. They help us to help you when browsing Makerhub. If you continue to use this site we will assume that you are happy with it.Ok